Physics is the study of how things move, how they push and pull on each other, and how they exchange energy. The Physics Experience show is a fast-paced, engaging, and educational physics program, filled with demonstrations that help people better understand the physics in the world around them, while having fun at the same time! 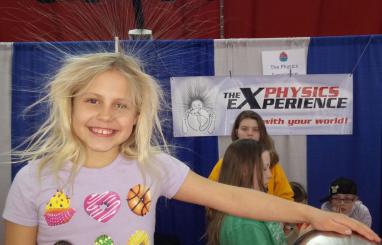 The Physics Experience is based on The Wonders of Physics (TWoP) program from the University of Wisconsin-Madison Physics Department. Since 1984, TWoP has educated and entertained hundreds of thousands of schoolchildren, families, and the general public.

Presenter Mike Randall is the former TWoP Senior Outreach Administrator. He has over ten years’ experience as a researcher in aerospace, military and industry; and over twenty years in formal and informal education, emphasizing science, technology, engineering and mathematics.  For the past sixteen years, he has been involved with a variety of educational robotics programs as an educator, team mentor, judge and referee.  He received a B.S. degree in physics from Nebraska Wesleyan University, Lincoln, NE.